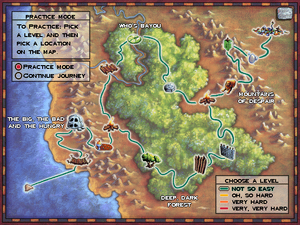 Who's Bayou is one of the two choices for the second leg of your journey in the Logical Journey of the Zoombinis, the other choice being the Deep, Dark Forest. Who's Bayou is composed of three puzzles:

The region starts at the Shelter Rock campsite, and ends at the Shade Tree campsite.

The region is named as it is, because when the Zoombinis traveled through they did not know owned or occupied the swamp after.

This region is a swamp notably wet and marshy. There is a river that comes through and turns back around. Crabs migrate up the river every so often. Once there was a leg that split off of the main river, but dried up this is where the Stone Rise is. Like so the western most area of the region is dryer than the Eastern part of it.

As one would expect, there are toads found here, but they are fairly large compared to Zoombinis. They commonly have marks on their backs. Giant Crabs live here too and migrate up the river. Creatures like Captain Cajun live here also.

Community content is available under CC-BY-SA unless otherwise noted.
Advertisement